Easter? I hardly know her. 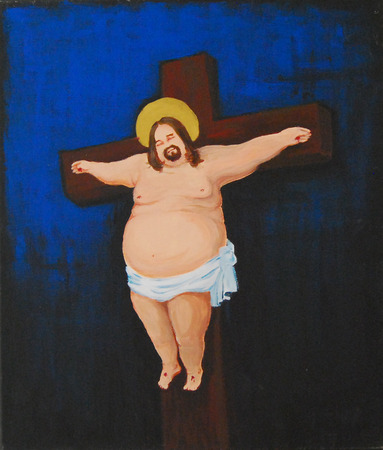 
shalom.
Every easter, i'm filled with all kinds of ambivalence. On the one hand, what you people did to ruin a pagan holiday dedicated to fucking, is a crime, literally, against nature. But, some decembers, the only thing that pulls me through the sleigh bells toward the eagles inevitable january playoff loss is knowledge that tho you may have won this round Jebus, we'll get you in april, we always do.

Even though watching The Passion of the Christ gave me a semi, holy hypocrisy batman, have you ever bitten into a maple cream egg, or torn the ear off of a white chocolate bunny? Some of that candy makes me want to embrace the monotheistic simplicity of the trinity, yo.

Also it's usually round Pesach, a holiday which i enjoy for other, less gastrocentric reasons. So tonight, as you fix yourself a leftover ham sammich, i wish you'd imagine your dead-rabbi-on-a-stick, up in the clouds of jasper with his wife prostitute friend, looking down at you while you take a big bite. Ha Kol B'Seder?

Actually one of my favorite bible stories comes from the Oestre legend. It's in the Gospel of Lori. Please allow me to quote scripture.

1: In the village of Phoenix there came to be a woman who was named Lori, daughter of Harold. And Lori bore a son named Justin. 2: When Shortly before Justin had seen seven summers, and weary of being known as Justin, the word of the lord came to him saying, go forth and rename thyself in my image and by my command. 3: Tell all whom you meet that you are no longer Justin and are to be called Spybee. 4: And so Justin did proclaim at the morning meal that the angel of the lord had come to him and he was thus renamed Spybee. 5: Lori did respond with the laughter of Sarah and it being the word of the lord agreed and she called him that.

6: Before the sun had reached the highest point in the sky, the word of the lord came again to Justin declaring "i am the lord your god and was just fucking with you. you are not to be called Spybee but again to be Justin"
7: Spybee approached his mother as she washed his tunics. "Mother, the lord has again spoken to me on this day and wishes me to again be justin." 8: Lori did not believe that the lord would speak twice and had already agreed to call the child Spybee and so it was, for all of his days.

It goes on from there. It's awesome. Tho i haven't seen lori in years, last i heard, she was still calling him spybee…kid's probably like 17 now. maybe she let it go.

but all of that leads me to my second favorite Spybee story. it was easter in the 90's and the kid got candy…holy fuck did he get candy. baskets and baskets of it. Candy that would last weeks if not months. Eggs, and Creams, Jelly beans, Chocolates Dark and Milky, White and hollow, solid and caramel filled. Wraped in colors like Joseph, laid in baskets like Moses, Reposed in Plastic grass of the brightest greens as a babe in a   manger.
Since it was Easter, to cope with the pain of realizing that ones savior is stuck to a tree on a hill in the desert, she told him to go apeshit, eat all the candy you want…and he did. What she did not tell him, was that this was just an easter sunday rule. Monday morning, young Spybee comes downstairs in jammies, hops into a kitchen chair and pronounces, "I think i'll start the day with just a peanut butter egg." His mother had the simultaneously unenviable, and hysterical task of informing him that his life had not, in fact, changed in a fundamental way and the age old childhood struggle of Man vs. vegetables was, not a pre-rapturous unpleasantly now and forever relegated to the memories of the saved and the drudgery of those left behind.

Kid prolly rebounded ok. he's from hearty stock, but the broader point is this.

Since before humans called themselves that. We've been gathering a few times a year to mark the passage.* And for just as long, those institutions seeking power or money or the power of money have tried and largely succeeded in wedging themselves between us and those rites**. So, there's prolly no god giving a rat's red ass whether you've got a ham or a hillel sandwich on your plate, but the important thing is that this week, hopefully, you broke bread* with some people that you love and don't see often enough. Or maybe you dressed in flowing gowns and buried an egg in the back yard, under the full moon, as an offering to the goddess.**** The specific rituals are irrelevant, the rites are not.

So I've got a couple of shows in the not so distant and immediate future. At each of these, you can gather with old friends, make new ones, drink a little bit and share your love of music.^ It's been far too long since i've seen far too many of you, and that's my fault. So rather than knocking on each of your front doors in the evening when i approximate you might be serving dinner. I'm trying to bring the seder to Elijah.^^

I've got some new songs which you may or may not have heard, and tuesday i'll be singing about passover, easter, eating alone, and crazy girls with lots of piercings and daddy issues.

Tuesday, april 26th, I've been asked to do a lil opening set at the grape room. y'know on grape street. chris kasper is playing a residency and chris grunwald is playing also. so basically it's two guys named after jesus, and one guy who's related to him.

I'll be the one with the nose designed to keep the sand out.

I'd love to see you there, and also see you there on saturday june 4th when i'll be playing in the upstairs chillaxed part of the grape, solo acoustic, bitches!

And, i'll be playing at Xfest this year. I play saturday night. sharing the stage with, among others, Peter Stamfel, Hoots and Hellmouth, The School of rock.

so yeah, it's just a few shows, but i'd love to see you there, i'll be the dork with the guitar.

**Though tuesday there's no cover

****if you ever get an invite to one of these, cancel all conflicting plans, it's awesome x awesome.

^or my approximation of music

^^the way my car is behaving of late, i may, in fact go to heaven on a chariot of fire someday soon.