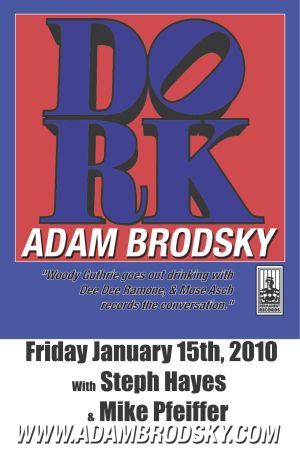 I have a tale to tell and hopefully it will be a delicate balance of cautionaryiousness and shadenfreude.

and so i warn you. It's prolly not a great, long term idea to keep your maling list on a server whose webmaster insists that you pay him in cash, weekly and demands that you meet him at 2am under the Frankford EL. Because one sunday night, in early january, Javier will just leave you standing there like the desiccated, sparse toothed working girls i have come to know and love.

He's either back in lockup or maybe he caught a case and is in the wind. Perhaps he is no more and we won't find the body 'til the snowdrifts melt. Either way, i've learned my lesson, the list is but a memory, and am starting anew.

so i've scrambled around in the attic and the basement and old hard drives and that storage facility with the bodies and i've cobbled together a motley version of the list. Which is why a good deal of you are, at this moment scratching where it itches and saying, "hmmm. i thought i removed myself from this prick's list back in the Clinton administration"

yeah, you very well may have. and if so, i'm 8 kinds of sorry, just send me an email with "Unfuckingsubscribe" in the subject line, and no hard feelings, i'll get you gone and that will be that. (or you can just clicky-clicky the unsubscribe at the bottom)

"hey fucko, a million years ago i thought you were clever because i was drunk and had just gotten dumped and you sang that song about that girl and i thought it was a good time, and i was like 26 and what the fuck else is there to do in Wichita on a wednesday night, but i didn't want a long term commitment to be a folksinger's fan and i unsubscribed myself from this list sometime back when i had to use a dial up modem to do it. so no, i'm not interested in hearing about your admittedly brilliant songs. I'm never coming to a show again, as a matter of fact, after you left my place (with a wet towel on the floor, i might add) i called him back up and we were marred like 6 years ago…ok. look, obviously i'm still a little angry with you, but that's my issue not yours. I'm actually glad to hear from you (kinda) i'm happy you're doing well and i really hope your shows are successful, but you gotta take me off this list, my husband and i share this computer and if he finds out it'll just start a nasty fight that won't even lead to make-up sex, so if you could just remove me from this list. K? thanks."

"hi, its me again, look, i have my work email address, why don't you sign me up at that address…again, good to hear from you"


or you can go with

"Hi. good to hear from you, but i almost never check this old address and frankly it doesn't really speak to who i am these days so if you could switch me from tequliachika69@barnard.edu to ssotomayor@scotus.gov i'd be grateful."

now i know we can rebuild this list…we have the technology…better than it was before…better...stronger…faster.

Tho now it's a mere fraction of it's former glory, if you have a friend who you think was on the list and would enjoy it, i'd be more grateful than a fireplace store if you would pass this screed along to 'em.

if you don't want to be like your parents or that annoying guy in the office with the forewords, you can send em the link here


now about that show.

i'm actually very excited to play with my little songwriting hero Steph Hayes, and Mike Pfeiffer. These are two musicians who i genuinely admire, so that's nice. I'm also pleased to play at Puck in Doylestown, it's a great room with a great sound system and it's in the county seat. so if you have to finalize adoption papers, or maybe change your name back from Ochocinco or plead guilty to something, you can park once and kill both birds. The food there is kinda stellar too.

The show's suburban locale is due in no small part to one of my dearest old high school buddies who claims that the peeps are a-clamorin' for a show but really don't like parking in town. Jon has even agreed to bring Colonal Hogan out of retirement for the event.

Jon is a master of sublime coercion, and i am in no way saying that pejoratively. as you know the beauty of the Col. was that he could not only get you* to comply with his desires, but he would get you to think it was your idea in the first place.

so i booked the show, and then i found out about this.

which is of course a facebook group started to pressure me into singing Monkey Butt, which is one of the 9 stupidest songs i've ever written…let me hand you over to the colonel for a minute.

As long as it's been since most of us have seen Adam play live, it's been much longer since anyone has seen him play Monkey Butt.  His big Puck show coming up on Jan 15th may seem like Elvis's big come back show in '68 (only without the leather pants...and without the comeback) but it will still be a disappointment without MB.  What would really put this show on the map and make it special is for Adam to end the long drought...come in from the wilderness...let the pigeons loose by playing what could be the "best song ever written".  His reluctance to play the song is puzzling, but we must make him realize that this is the chocolate that ended up in the peanut butter...it's his post-it note...damn it it's like the folk song equivalent of tungsten. So please, before we break out the torches and the pitch forks, stop by and make your voice heard at the Facebook group:  http://www.facebook.com/group.php?gid=168297691125

ok, i'm back…see what i mean, he's makes a compelling argument, almost enough to make me forget that his goal and mine are not the same. I want to continue my streak of never having had an escape from stalag 13 (i.e. put on a great show) and he wants to bomb a ball bearing factory in himmelburg and get under helgas sweater (i.e. humiliate his dear friend in front of a room full of people.)

well i am nothing if not a man of my word. so if he does indeed get 100 people to sign up for the group, i will honor the sanctity of the bond and play the loathsome Monkey butt, Michael Jackson verses and all.

but the show will be more than that. I haven't played for real in months if not decades, and i won't be playing again until april, plus, it's only $8 i mean, that's like less than $3 an act. i'm worth $2.75, easy. and i'd pay double that to see steph.

plus i'll be debuting a few songs…but don't worry, not too many.

Ok, i've taken up enough of your farksurfing time.

A Night of Three Halves. Join us. Don't be one of the Halve nots.
map this location
export this event to my calendar [works with iCal, Entourage, Google Calendar]

Adam Brodsky
Adam Brodsky has a Guinness World Record for playing folk music. 50 shows, 50 states, 50 days. That and a token will get him on a bus. But that was earlier in this decade when things were simpler* Adam's songwriting has won awards and accolades and made tens of thousands of people clap.** His live show is at once cerebral, outrageous and provoking, combining the best aspect of the "OMG I can't believe he just said that, but it's kinda true" with "Damn, that was kind of a tender sentimental song, for a sing along about hookers" It's great craft, delivered simply, with the traditional Antifolk ethos. On his best days he occupies the space in those circle charts where Woody Guthrie, Bob Dylan and most of the Hanks overlap with the Ramones and the Dead Milkmen. On his bad days he occupies a couch in front of the History channel. But as he ages, people have told him that his Willie is starting to show. Eh, describing sounds is an imperfect science, but his live show is an imperfect art. Come see him, and you're guaranteed to see something unique. Seriously. Guaranteed.***

*and by things I mean the president.
**cumulatively, natch.
***Guarantee not valid in Utah, CO, and VA.