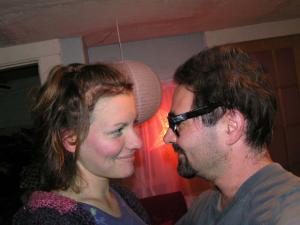 so twice, in the next week or so, i'll actually be strapping on the wood and wire and playing, albeit briefly.

note that these two "performances" do not an emergence from the bunker make. i mean even howard hughes had to step out occasionally, for a road trip with melvin, or to marry a 14 year old mormon girl at sea.

so i'm still coocooned. but dont worry, when i do finally emerge for real, i'll no longer be that roly poly mandibled eating machine. but rather a ephemeral colorfully winged wasp waisted beauty, flitting on the breeze seeking desparately to mate before my brief adult life comes to an all too hasty end.

but enough about me...the reason i'm emerging at all (other than the stench in here) is that i have been asked to be part of 2 wonderful celebrations.

Celebration, the first.
I will be playing a couple of songs at the Tin Angel this thursday, to help the Titanic Teuton Antje Duvekot push her debut record through her birth canal, cut its cord spank its slimy bottom and then sell it to you guys.

if you're like me* you're saying "um...antje. isn't this like your um, 3rd first record? i mean i have that puny peppermints one, and that other one, and that demo. and now this...how many first records can you have, i mean is it like those born again virgins?"

to which she would most likely respond, "juden, achtung, delousing, vermin"**

anyway, she swears this one is the last first album, cause its finally come out right.

i can't wait to hear it. and all fucking around aside, i'm about as flattered as a fat kid at the prom to have been asked to dance with the queen like this. Seriously, she's like 6'2 and prettier than porpose with a kitten in its mouth. And believe it or not, she's nicer than she is pretty. i mean you'd have to be pretty nice, to invite me to sing at your record release.

but come out, Tin angel is a great place to see a show, and this will be a great show to see, it will also feature Phil Roy, Lizanne Knott, Brad Yoder

then a mere 7 days later on May 24th, i will be joining about 7 dozen other boys and girls at the smoked joint, 1420 locust street. ken kweder and ben arnold, and steph hayes, and many more who's names i should know will be celebrating bob dylan's 65th birthday by singing his songs and telling stories and eating ribs. Rabbi Zimmerman will not be attending, but Peter Stone Brown, will be, and for my money, that's actually preferable.

so i'd love to see you at these two "shows" if you want to come out, that would be swell.

*and i certainly hope you're not