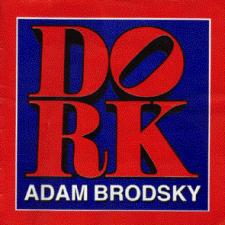 Adam intended this album to be representative of his live, unrehearsed performances. Instead, after extensive tinkering, he settled for this: a patchwork of his live shows spliced together. Still, DORK, the album, captures the spontaneity and quirks of Adam's live performances: assaultive, rambling and/or profane banter; impromptu musical rearrangements; forgotten lyrics; ad-libbed pandering interspersed with scouring asides; and, eventually, the Songs. Adam's Skills as an incisive songwriter are often overshadowed by the crudeness and candor of his performances. Hopefully, DORK will dispel, or at least amend, Adam's reputation as an abrasive fraud with a probable personality disorder by proving once and for all that, despite the insolence, the seedy appearance and overall lack of professionalism, it's the songs that truly matter. This album repeatedly demonstrates why synapsing organisms prefer the wit and acuity of Adam's songs to his irritating, self absorbed prattle." -- Greil Marcus